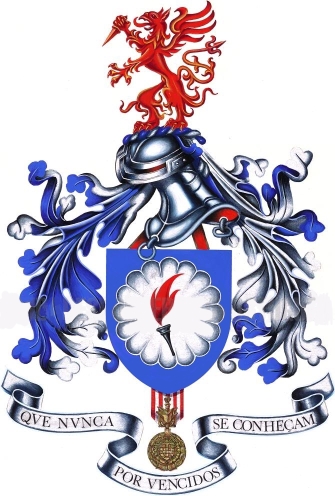 Military service was mandatory until 2004 and therefore was part of every male young Portuguese. I joined the Army paratroopers special forces because I wanted to be part of the elite soldiers. I believe that if may other could do it, so could I. It was also one of the biggest challenges and tests I had imposed myself, and I wanted to know how I would cope with that… And also… Because I had never flown on a plane before. So I could do it for free!

I guess that the main things I got from this experience were mainly the skills I acquired such as team spirit, group union, the ability for overcoming obstacles and unknown situations, being able to endure sacrifices and stress resistance.

My training started in March 1996 and was had several different stages. The basic recruitment training, the Paratrooper Course and the Specialty training.

Basic recruitment training lasted for 60 days. In this, the military is taught what are the rules he needs to obey to, how to perform his duties and what is expected from him, as an active military.

Basic instruction on platoon integration, weapons management, military operations, combat training and a lot of physical endurance and exercise is a daily routine.

Apart from the basic instruction, some time is invested in learning and perfecting the so-called drill commands in preparation for the ceremony where each military pledges allegiance to the flag in a sworn commitment to his country.

Although “basic” this training was already paving the path to what a career in the paratroopers would be, as the students were expected to perform far beyond any other “normal” military training. Many of the newly recruits had to face the reality that this is not a normal troop and each individual is expected to deliver everything it can and even what he can’t. That would lead to some not being able/willing to continue.

This is the most important and unique course for the paratrooper. It’s in this course he will finally be promoted from a half-wing (student) to a fully certified paratrooper. It’s at the end of this course that he will also receive the so long anticipated green beret, the symbol of the admission in the core.

This course consists of 60 days of intense training, where physical endurance and mental perseverance are taken to the limit, in order to prepare the body for the harshness of each jump, but also to separate those who would like to be a paratrooper, from those who would go through anything to achieve it. It is estimated that nearly 40% of the students will eventually drop out anytime during this course.

At the end of those 60 days, the student would be required to perform at least 5 out of 6 mandatory jumps in order to receive the beret, at a ceremony that would occur at the end of the last jump.

From that moment on, he would no longer be considered a student and would be “accepted” as a paratrooper, even though his instruction only just started. But at least small perks would now be given such as hot showers, admission to the bar after instruction, ability to engage in a normal conversation with any other paratrooper, or even, normal use of the sidewalks (that were restricted to “Gods” aka men who fly the skies).

I was assigned a field shooter, which would mean a lot of combat and weapons training.

The course itself theoretically should last for 3 months, but what we would eventually realise, is that it actually never stopped. We were supposed to be ready for duty at any time, so we would practice combat operations, field progression, physical endurance, weapon practice and many other throughout the rest of the days of our career.

The “job” of a soldier

We were soldiers and were expected to be deployed at any time, so we could not slack and get lazy. That meant that our mission could be assigned in a matter of hours, and we would need to deliver.

Although Portugal is not directly involved in any world conflict, it is part of NATO and some contributions are made when requested. We were part of the 1st BIAT (1st Airborne Infantry Battalion) and at that time the battalion was part of NATO’s SFOR operating in Bosnia and Herzegovina.

Apart from that, some side missions were occurring and some small groups were required to intervene at any given time.